Facing mounting pressure from campaign groups like Shelter, the Government have been exploring a number of new measures to improve the renting experience for tenants, both in the capital and on a national level. From rent controls to landlord licensing, and longer tenancies to the fees ban, a range of ideas have been put forward.

A new YouGov survey conducted by rental marketplace TheHouseShop has revealed what Londoners really think about the Government’s new ideas, and what measures they believe would make life better for tenants in the UK.

The most popular option to improve the renting experience for tenants was the introduction of mandatory landlord licensing, whereby all landlords would be forced to apply for a formal “landlord license” when renting out a property, and be registered on an official database. Almost two thirds of Londoners (65% excluding “don’t know”s) thought mandatory licensing would make life better for tenants in the UK.

The 2nd most popular option was the introduction of a searchable “online rogue landlord database”, where tenants could look up a potential new landlord to check for any illegal or unprofessional activity (63% excluding “don’t knows”). While there is already a basic rogue landlord database in the capital, there is not a single, comprehensive database with national coverage.

“Especially in London where the rental market is so competitive, most people will have a friend or family member who can tell them a horror story about a nightmare landlord or a terrible rental property. And the fact that, in many cases, these landlords can continue letting out sub-standard rental properties with no way for future tenants to know about their chequered past seems like an oversight from a regulatory point of view.”

The third most popular option among Londoners was improving rent controls, for example by imposing a maximum cap on rental prices. Around 6 out of 10 Londoners (61% excluding “don’t know”s) said that a better form of rent control would have a positive impact. Research conducted by TheHouseShop last year found that many tenants are shelling out more than half their monthly income on housing costs, so it is not surprising that any proposed measure to prevent rental prices spiralling further out of control would be popular among Londoners.

“When finding a new place to live, renters really know very little about what they’re signing up to – especially what the landlord will be like to deal with. It’s not surprising that there is so much support for measures like licensing and a database of dodgy landlords. the database would allow renters to avoid the worst operators, while licensing will provide extra confidence that landlords meet minimum standards.”

“Rent is too high for a start, but the threat of a rent increase can discourage renters from asking their landlord for repairs – so some form of rent control is also essential.” 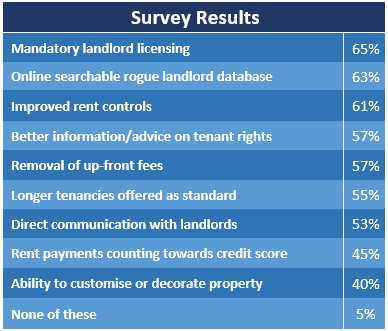 Another one of the Government’s proposed measures to improve the rental market is the introduction of longer tenancies as standard, with a minimum 3-year term offered on all rental contracts. There has been relatively broad support for this among politicians, but the survey results from the general public showed less support. Longer tenancies were the 6th most popular option amongst Londoners (55% excluding “don’t knows”), being beaten by the removal of up-front fees (57%) and better information on tenant rights (57%).

Over half of Londoners (53% excluding “don’t know”s) said that even something simple like the ability to communicate directly with the landlord, as opposed to going through a third party agency, would improve the renting experience for tenants.

Nick Marr explains how businesses like TheHouseShop and others in the PropTech space are finding innovative way to improve the rental experience, without the need for Government intervention:

“While we can’t force the Government to introduce landlord licensing or a rogue landlord database, there are a number of points highlighted in the results that we are already addressing with what we do at TheHouseShop.”

“Unlike the big agent-only portals (Rightmove and Zoopla), we are one of the few platforms to facilitate safe and secure communication between renters and landlords – allowing them to deal with each other directly from start to finish in a peer-to-peer transaction. On top of this, the vast majority of our landlords will not charge any up-front “admin” fees to tenants, helping to cut costs when tenants move into a new property.”

“New players in the PropTech space are coming up with really innovative solutions to improve the rental market, and are managing to outmanoeuvre the more established, traditional players as a result. From removing the need for costly deposits, to improving transparency in the rental relationship and levelling the financial playing field for younger renters – PropTech businesses are changing the rental market for the better.”